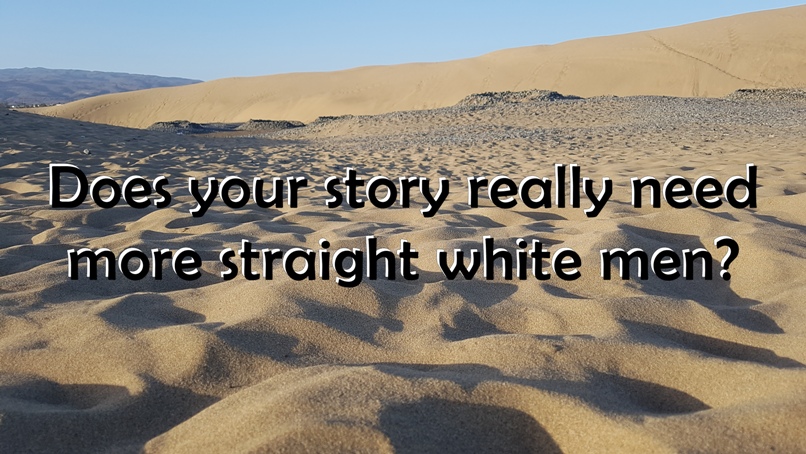 Unless you’ve been lost in the desert, it won’t have escaped your notice that there’s quite the debate going on about diversity and representation in film, both on and off-screen. Now, the off-screen bit is something that’s a little out of our hands as writers, but onscreen is definitely something we can give a couple of nudges to.

Like I’ve said before, I’ve been around a bit and one of the things I’ve noticed in almost any script I’ve worked on: they read as white as the paper they’ve been written on.

Now, part of that isn’t necessarily the writer’s fault, but falls more on the reader, whatever their role in the process. If there is no description of a character’s ethnicity in the script, we’ve been raised/trained/indoctrinated into assuming they are white. But then, it can be argued (which I’m doing right now) that it’s up to the writer to keep those assumptions in their minds when writing character descriptions.

Of course, those descriptions don’t necessarily have to be bluntly spelling out what a character’s ethnicity is. We can guess by their names, for example. Johns tend to be white (although they can just as easily be African or Chinese), but if they’re called Muhammed, we’ll probably assume they’re Arabic. Elsa is a girl who’s white as snow, but Aisha, Djamila and Fatima are probably not as white. Then again, Donald can be orange, so maybe it only works up to a point. And I rejoiced when Star Trek Discovery’s main female hero was called Michael, defying gender expectations, only to have the yay sucked out of it a little when they reaffirmed gender expectations by making her an exception. So close, Star Trek, so close…

But there is more to a character than just their name that can give clues to their ethnicity. If a character is black, then there’s a high probability they won’t have had the same kind of upbringing and social status as their white counterparts. Which means their ethnicity, if used to full effect, can ooze into every aspect of their character, giving them and your script a richness and authenticity that will set them apart from the toothpaste white films that surround them.

And let’s not forget that most writers somehow end up writing their main characters as male characters. How… original. (And cis-male at that.) But things can get worse, with women not just in the minority in scripts, but also written as subservient, plot devices, sex objects, background or just crazy. I’ve broken many a pencil in frustration at that.

So help save my pencils and look beyond the straight white male when you’re thinking up your characters. Because there is no good reason for your script not to reflect society – and your audience. I’ve had producers explain that audiences won’t go to films starring ethnic characters, or that boys won’t go to films with girls in the lead.
Thank the gods of film making for Black Panther and Wonder Woman, so we can finally put that kind of bullshit to rest. (Yeah, right…)

Now, from my own producing experience, a tiny proviso. Sometimes, especially with less experienced producers and no budget productions, lack of diversity is because of any conscious effort, but an unfortunate matter of circumstance. In my own pilot for Queers, I intended for Faisal (again, the clue is in the name) to be a queer BAME character. Cos, y’kow, quite a few gays are non-white. Unfortunately, my network was too limited and the shoot date looming, meaning that after a few non-white actors declined the part, I cast a white guy in the role mere days before filming. He was absolutely great, so in that respect I most definitely didn’t settle, and he’s Norwegian, so there’s at least some immigrant aspect, but it’s still a regret that the cast ended up being less representative than it could have been. Hopefully if the show ever comes off the ground properly, that can be redressed. Plenty of ideas for that. And at least I got the queer part right.

Overall, though, we writers should make more of an effort to make our characters as diverse and interesting as possible. Bring out the various colours of humanity, embrace different cultures, break the gender rules, make the women strong, make the gay men strong and the lesbians more than just butch. It will lead to better, more defined characters, livelier and richer scripts, and with any luck some much needed changes the industry from the inside. I’m game if you are…