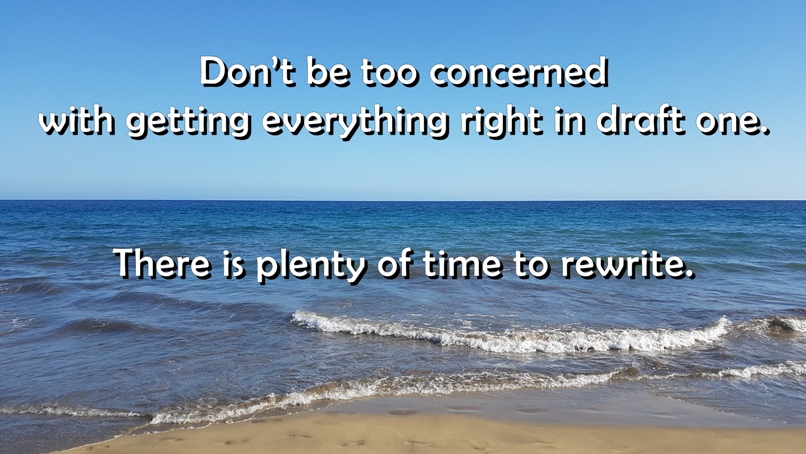 When you’re in the zone, writing can be the most exhilarating thing ever. The words just flow. The characters feel like they speak to you. The jokes are not just funny, but downright hilarious. You’re a writing god! Nothing can stop you. Not even that lady next to you on the phone.

When you’re not in the zone, it’s agony. Every word is fighting you. Every joke is lame. No character speaks like that, ever! You’re a hack! And everyone around you is annoying and out to sabotage you. Especially that lady on the phone.

It’s the ebb and flow of writing, to use the obvious metaphor to accompany this picture.

Now, obviously, we want every time that we’re writing to be absolute heaven, an almost incessant flow of creativity. Unfortunately, we have to be realists. I know, it sucks, but you can’t have it all. Some days will be downright… ebby and abysmal. They can’t all be winners. Most of the time, we can even accept that.

So why is it, then, that so many writers expect to get their script right on the very first draft?

I’d say it depends. For some it’s sheer hubris (every script reader will have read those), for others inexperience and naivety. For most of us it’s probably just wishful thinking, since it would save the arduous, relentless rewriting and killing of darlings which is actually pretty much inevitable and lets us get on with writing the next fantastic idea we have.

Yeah, you read that right: inevitable. Like King Cnut demonstrated the tide was.

In all the years I’ve been doing this script editing malarkey, across all the projects I’ve worked on, I have yet to read a script that was perfect. I’ve also very probably (bar my own writing) never read a first draft of a script that was actually a proper first draft. Because even if we want it to be perfect on the first go, we know it isn’t.
Deep in our hearts, we know this bit needs a tweak, so does that bit, and that bit, I don’t know what I was thinking… And that’s before some outsider comes along and points out all our blind spots. Because again, it’s inevitable that we have them. It’s fine. We don’t need to be perfect on the first go. We can take the time to take out that bit that doesn’t work, tweak the ones that almost work, restructure character development, cut the dodgy lines, merge characters, or whatever else is needed for the next draft to be better. Quite often it’s that very process that brings into view what the story is really about. The longer you spend time with someone, the more you get to know them – and the same applies to your story and its characters. So take that time. Take all the time you need.

There’s a wise saying: scripts aren’t ever finished, they are yanked out of a writer’s hands by the production crew on the first day of shooting. So take all the time you need, but keep an eye on your deadlines.

Personally, I work with a draft 0, which is the draft in which I will write as unfiltered as I can (being an editor by nature, it’s impossible to not edit as I go along, but I’ve learned to accept it, otherwise things end up as rambling as my blogs), put everything in its right place and then prepare for the slaughter of rewrites and rework it into a proper first draft. Some people call this 0 draft a vomit draft, where you just chuck everything on the page. Lovely metaphor…

So, what is a proper first draft? Well, I think Steven Moffat said it pretty well: it’s the first draft you hand in that you honestly think they could go and make – and you wouldn’t get arrested. But you have to be prepared to change it all.

(I’m paraphrasing. Head here to listen to the words in full.)

It’s important to keep in mind that you’re not on your own. Yes, you are THE writer, but there are others around you who can help: script editors obviously (I would say that), but also directors or producers. If you’re working on a commissioned script, those people will be part of the process. If you’re working on a spec script, you might get help from your agent, hire a freelance script reader or ask people around you to be brutally honest about the flaws of your masterpiece. Options aplenty for good feedback to help you make that flawed masterpiece into an ever less-flawed masterpiece.

You’ll have spotted the brutal honest bit there. Don’t let it bother you too much – which I know is easier said than done. What I mean by it is that it doesn’t help if someone just feeds your ego by saying how wonderful it all is – even if it is all wonderful. Feedback isn’t meant to affirm your brilliance; it’s a tool for you to improve your writing. That should definitely include pointing out which bits are wonderful, but just as important is pointing out the bits that aren’t. Because then you know which bits to work on so that the script becomes even more wonderful. So it helps to manage your expectations: there will be things to fix and someone pointing that out isn’t trying to make you cry, but wants you and your script to become even better. It can be a tough balance for someone giving you their feedback. Some will be too nice, some may focus a bit heavily on the things to fix (which I have been known to), but the intent is always to help.

And don’t be afraid to speak out if you find someone’s notes aren’t helpful – feedback on the feedback can be crucial in establishing a working relationship. I mean I should probably have had someone telling me this blog was digressing a bit. Maybe I should do a next draft…