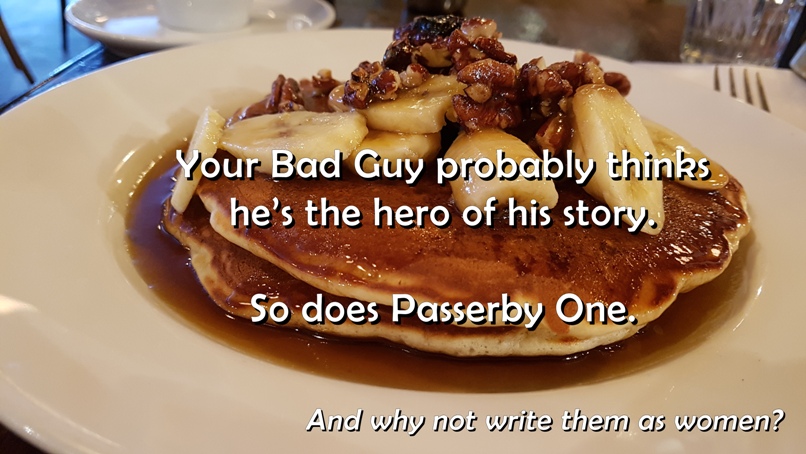 We love a good baddie – to use a technical term. Alright, the real technical term is antagonist, but that just sounds so theoretical. Baddie is so much more colourful. Or villain. That’s a good one, too. A good bad one, obviously…

Antagonist is a more apt term, though, antagonist, because as much as it may seem sometimes, the world is not that black and white.

Not everyone who is working against your protagonist (or goodie) is necessarily bad. Not even from your goodie’s perspective. They may just be a regular person whose goals are simply incompatible with those of the protagonist (who might not necessarily be all that good to begin with). There might also be more than one of them. They might not even be a person at all. They can be the doors that accidentally slam in the hero’s face. The hurricanes in Twister certainly weren’t people and they were definitely a force of antagonism for the main characters.

By now you’ll have figured out I can be quite the contrary beggar, so it won’t surprise you that I actually prefer the later term: forces of antagonism. Things and/or people that actively or inadvertently work against whatever your protagonist is trying to achieve. Obstacles for them to overcome. And the bigger the obstacle, the more of a hero our protagonist becomes.

Now, take the doors as an example: they can just be broken and without any malicious intent (other than from the writer) frustrate the goodie. But the might also have been sabotaged to actively hinder them, which in turn implies that they were doing someone else’s bidding. There’s a bigger baddie! Or just an idiot who broke the door. But let’s go with the bigger baddie. And let’s look at Star Wars for a paragraph or two.

The rebels need to get the plans to the Death Star to, well, other rebels. But they are being chased by a great big Star Destroyer. Presumably, there’s a pilot driving the damn thing, who’s probably just following orders (it’s that kind of Empire, after all). Go high enough up the food chain and you’ll find the film’s big bad: Darth Vader. Cool looking dude, but he does kinda delegate much of the action to all those troopers. A faceless, but menacing bunch. Kinda evil for evil’s sake and there’s not really that much depth to them. Partly, that’s of its time and how pulp villains were (and sometimes still are) written. But their being faceless also helps the heroes be heroes in the climax of the film.

Consider if we did learn more about what makes those Stormtroopers tick. If we knew about their family struggles, that they were doing it to lift their kids out of poverty, that there was something noble or human about them. Now consider the film’s heroes blowing them all up at the end. By keeping them faceless, those casualties are just numbers, not characters we might have become invested in. It keeps the heroes pure and the rebellion noble in their struggle against the evil Empire. Black and white.

Over the course of the saga, in Empire Strikes Back and Return of the Jedi, we learn more about Darth Vader, about his connection to Luke and Leia, about the man he is answerable to: the Emperor. We learn of the perils of the Force, about the appeal of the Dark Side, its seduction. We come to care for Darth in a way we didn’t in that first film. We also come to feel that the Emperor deserve his fate when that second Death Star gets blow to bits – but we still don’t care about the faceless troopers who are collateral damage and burning up in the atmosphere while our heroes party with Ewoks.

Now, let’s go back to what’s in the picture: the bad guy thinking they’re the hero of their own story. In essence, all Darth Vader really wanted was for his son to be by his side, which he considered to be the right thing to do. If he weren’t on the Dark Side, that’d actually be pretty noble. But since his heart is in the right place (somewhere inside that life-supporting armour), he can actually be redeemed by his son, brought into the light. In a way, he still wins: he gets to be by his son’s side. That may not be quite the side he expected, but it does mean he gets spiritually rejuvenated and reunited with old (and not rejuvenated) mentors Obi-Wan and Yoda. The journey gets extended with the prequel trilogy, but I’m not wading into that quagmire.

All of which is to say: it matters how much we as writers know and show about the characters who inhabit our stories. It matters if we convey to the audience that they are characters with hopes and dreams in their own right, whether they are good or bad, pro- or antagonist. It matters if the little guys are faceless or not.

And since we’re not living in a black and white world, it also matters how much consideration you give to your characters’ ethnicity and gender. It’s something I’ll get into at a later date, but for now just imagine the story if it had been Darth Mother…